Martin Brynskov, Chair, OASC, Associate Professor, Aarhus University: “It’s an amazing recognition of the work and ambition of the cities who have come together to help shape a global smart city market, in a time where convergence is not a given. We look forward to working even closer with industry to create proper technical foundations for healthy societies in the digital transition.”

OASC is working towards establishing so-called Minimal Interoperability Mechanisms (MIMs), aiming a common technical ground for IoT and smart city and community services. The approach is to keep things simple and driven by actual implementation, in order to address the urgent needs of cities and communities around the world, recognizing that resources are often scarce and project investment profiles risky.

Recently, Martin Brynskov signed TM Forum’s ‘City as a Platform Manifesto’ supporting the use of common standards and technical specifications, offering a direct path to creating an open, flexible, and interoperable, city platform model and showing commitment to use digital platforms to improve the quality of life for people and the planet. 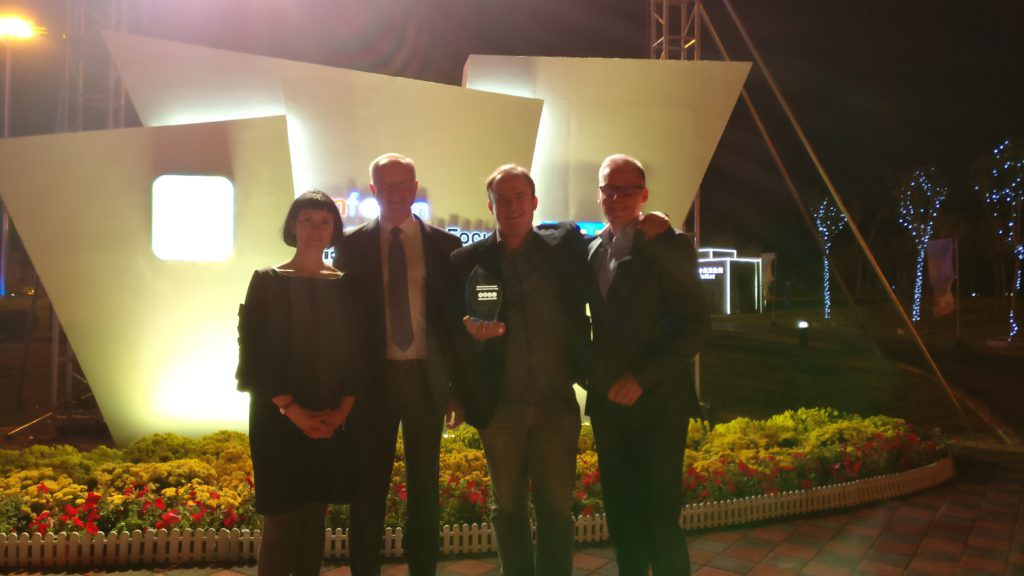 Carl Piva, MD Smart Cities and VP TM Forum: “We are delighted to award OASC for its focus on a key set of important common challenges cities need to address as a community.”

One of the world’s premier gatherings, the event in Yinchuan, China brought together 1500 executives and government officials of the global smart city ecosystem.

OASC founding organizations/members – Aarhus University, Future Cities Catapult, imec-SMIT and City of Tampere – are all ambitious about the future of the organisation and its global impact.

Jarmo Eskelinen, Chief Innovation & Technology Officer, Future Cities Catapult: “It is great to be part of the success of the Open & Agile Smart Cities network. One city is not a market, so it is critically important to bring cities together to do concrete work on interoperability and shared practices. The Future Cities Catapult wants to join forces with leading cities and companies in OASC to develop shared smart city enablers. Such open assets can be rapidly taken into use by cities, to enable the fast growth of the global Advanced Urban Services market.”

Pieter Ballon, Director of imec-SMIT: “imec is thrilled about the joint commitment to open reference models by both OASC and TM Forum, and see this recognition as an opportunity to strengthen the OASC impact considerably. We already see the benefits of such an approach in our OASC-Smart Flanders programme, where we bring the 14 largest cities in the region together to agree on common, open models and a joint data charter.”

Teppo Rantanen, Director of Growth, Innovation and Competitiveness from the city of Tampere, a member of both OASC and TM Forum: ”Our aim in supporting OASC from the very beginning has been to openly share and copy smart city solutions to make the everyday life of citizens smoother and easier.”

Open & Agile Smart Cities is gathering for the annual Connected Smart Cities Conference in Brussels 11 January 2018 and will be present at the Smart City Expo World Congress in Barcelona 14-16  November 2017 with joint forces of the founding members and city representatives of the global network.

The global Open & Agile Smart Cities initiative (OASC) is an international network of national networks of smart cities. The overall objective is to foster a global smart city market based on the needs of cities and communities, establishing Minimal Interoperability Mechanisms (MIMs). OASC currently has 114 member cities from 23 countries. If your city is interested in connecting with other cities and join the OASC network, send an email to info@oascities.org or contact your OASC representative. The full list of contacts can be found on www.oascities.org

TM Forum is a neutral, non-profit member organizations and the global industry association that drives collaboration and collective problem-solving to maximize the business success of communication and digital service providers and their ecosystem of suppliers. TM Forum represents over 850 member companies generating US$2 trillion in revenue and serving five billion customers across 180 countries.